This is the write-up for the “Open Thermal Exhaust Port” forensics challenge from MetaCTF CyberGames 2020, which was worth 275 points.

Challenge statement: Our TCP connect Nmap scan found some open ports it seems. We may only have a pcap of the traffic, but I’m sure that won’t be a problem! Can you tell us which ones they are? The flag will be the sum of the open ports. For example, if ports 25 and 110 were open, the answer would be MetaCTF{135}.

This is a basic forensics challenge intended to be an introduction to packet analysis tools like wireshark. The challenge is simple: we have a pcap (packet capture) file from a TCP connect nmap scan, and we need to figure out the sum of the open ports on the target that was scanned.

Feel free to skip to the Analysing the Pcap section if you already know all the basics in the upcoming sections!

You should know a few (basic) things in order to understand and work out this problem.

So What is a TCP Connect?

Before we even look at the network packets, let’s go over some TCP knowledge that we’ll need.

At this point, the client and the server can exchange data.

But what happens if the server does not want to connect?

In this case, during the second step, the server replies with RST + ACK, where the RST means “Reset”. This is how the server says, “I acknowledge that I got your message but you cannot connect with me”.

There’s obviously a lot more to TCP, but this is all we need to solve this challenge. So let’s move on.

Setup is simple. You just grab the pcap file from the CTF challenge page, and install wireshark on your system.

Let’s start looking at what we have. Load the pcap into wireshark.

If you’re starting wireshark from the terminal, like I did, you can give the pcap filename as an argument to wireshark.

Wireshark starts with an interface that looks like this: 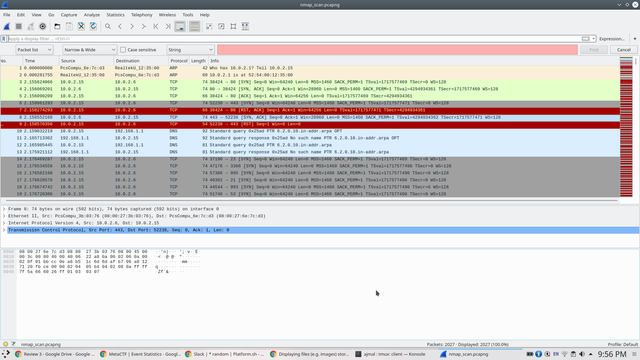 You can immediately see that we have the most crucial stuff in a nice table - source and destination IPs, the protcol, and the information about that packet. Since we’re looking at TCP packets, you can see some of the messages we discussed about in the TCP connect primer section.

Now let’s figure out what the open ports are. When nmap does a TCP connect scan, it just tries to connect to every port on it’s list. When a connection succeeds, the server responds with a SYN + ACK. When it fails, it responds with an RST + ACK. So our task is to look at all the replies from the server where the source IP is the server IP and the info has a SYN + ACK. Whenever we find such a packet, we understand that the source port is open. And hence we add all the open ports up, and that’s the flag.

At this point, you can start scrolling through the hundreds of packets looking for what you need…

…or you can be smart and use wireshark the way it is supposed to be used!

What we need to do is filter out the packets that we need. Let’s see how we can do that.

Towards the top of the wireshark interface, right below the buttons, you’ll see a long input box with the placeholder text, “Apply a display filter…”. You can use this to filter packets using a special query language within wireshark.

For starters, we’re interested only in server replies, so let’s narrow down to only those packets which came from the server. Enter this in the display filter input and press enter. Note that the input box becomes green when a valid query is entered:

We now see this: 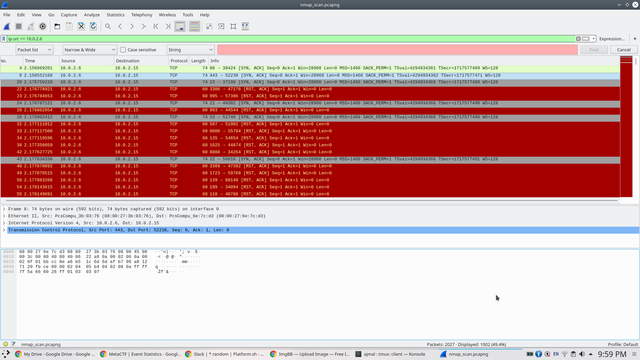 This filters out all the packets which have a source IP of 10.0.2.6 (i.e. our server). The display now contains far fewer packets, and all the packets are either SYN + ACK or RST + ACK. This is actually good enough for us to scroll through and add up all the open ports (i.e. the packets with SYN + ACK), but let’s refine our query a little to filter out the packets that are from closed ports. 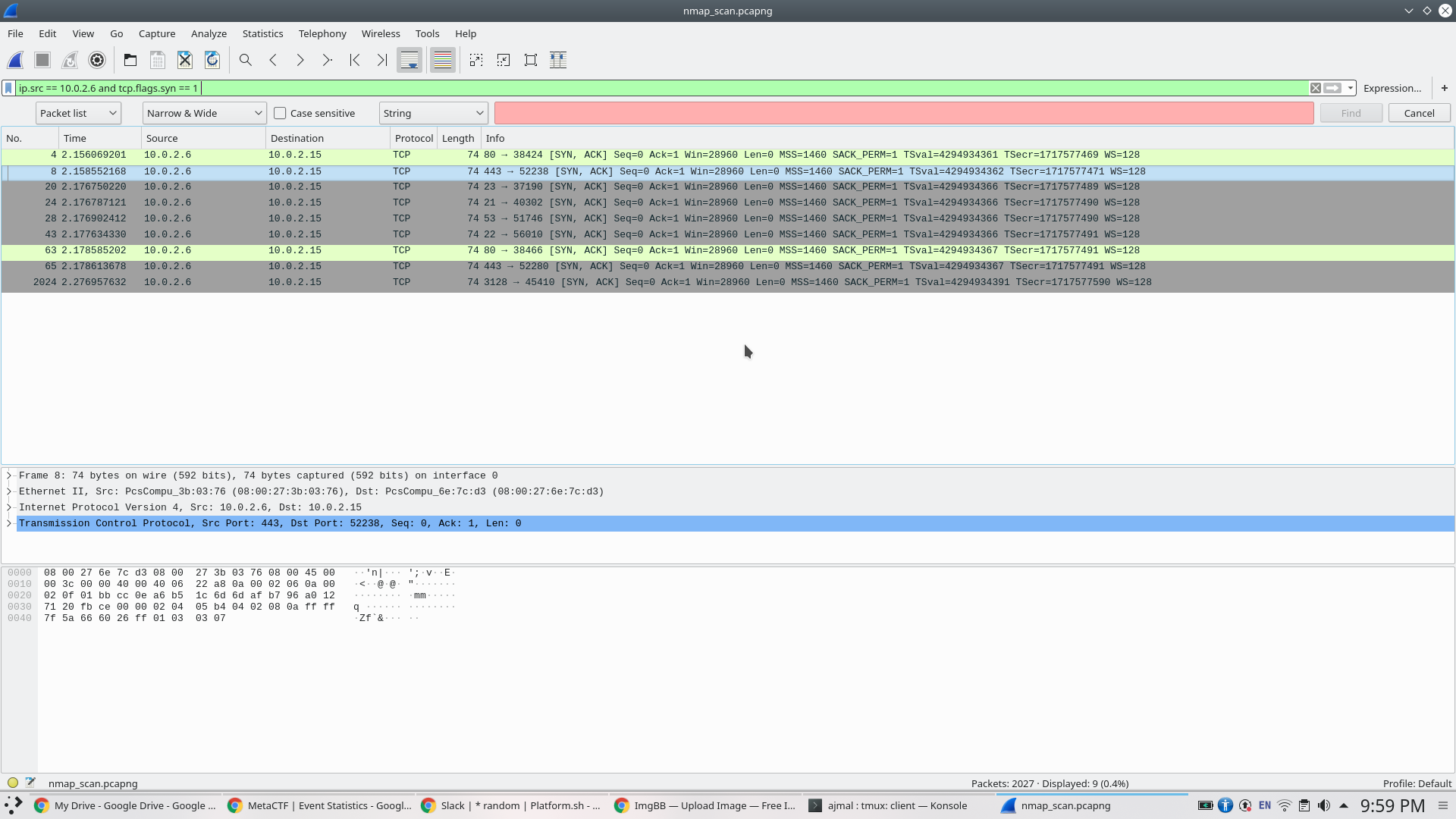 This query adds a new condition stating that the SYN flag (yes, it is technically a flag) should be one, and then combines it with our previous query using the and operator. Effectively, we are looking for packets which have a source IP matching that of the server and having the SYN flag set. We now see exactly what we need!

Whip out your calculator, add up all the source ports (be careful to avoid duplicates), and you get the flag!

Which leaves us with only one task: figuring out why this challenge was called “Open Thermal Exhaust Port”…